The specter of authoritarian regimes is haunting the EU

Political Capital assessed the openness of Members of the European Parliament (MEPs) to authoritarian influencing efforts based on over 90 foreign policy related votes cast in the Parliament. The votes were categorized into five groups: critical attitudes towards the (1) Chinese Communist Party, (2) the Kremlin and (3) other authoritarian regimes, and support for (4) information sovereignty and (5) common EU foreign policy strategies. A corresponding index was created for all five categories. All MEPs, national parties, national delegations and EP groups received a score (0-100) on these indexes, where 0 indicates the most pro-authoritarian attitudes, while 100 describes the most authoritarian-critical ones.

As Figure 1 below shows, MEPs can be divided into five groups based on their scores on the five indexes. The largest group is that of Integrationist Hawks, who make up 53% of the 680 representatives who cast at least the minimum number of votes required. They do not only support joint action against almost all authoritarian regimes, but back the development of common EU strategies in the fields of disinformation and foreign policy. Establishment-critical Hawks – mainly from the European Conservatives and Reformists and the Greens (26%) – would also be in favor of strong action against authoritarian states, but they often express concerns about joint disinformation and foreign policy strategies. Besides the Polish ruling PiS party, several other Central and Eastern European governing forces belong in this group, such as ANO 2011 and Fidesz. Sovereignist Balancers are a much smaller group (8%) than the previous two, including members such as the Italian Lega. They almost completely refuse common EU action against disinformation or joint foreign policy strategies, but are critical of numerous authoritarian regimes, although much less so in the case of Russia, unlike the previous two groups. Hypocritical Pacifists (6%), such as the Austrian FPÖ or the Greek Syriza, do criticize China or other authoritarian states on a case-by-case basis, but are only critical of the Kremlin rarely, while Eurosceptic Dictator-huggers (8%) are unlikely to support any EU action. The latter group is represented, among others, by MEPs from the German AfD and the French National Rally.

Figure 1 Categorization of MEPs based on their scores on the five indexes.

China’s “soft” and “sharp” power efforts are relatively unsuccessful in the European Parliament. The country’s blind supporters sit almost solely in the far-left of the EP (see Figure 2 below); texts condemning the actions of Beijing are a good opportunity for them to voice their anti-American sentiments. MEPs approved the China-related resolutions we examined by a majority of at least 85%. Thus, the regime in Beijing is more likely to target nation states and individuals: It seeks to leverage its economic prowess and corruption potential to influence European political decisions. One example for such efforts is Hungary, where multiple joint Chinese-Hungarian projects are being realized. The consortium renovating the Budapest-Belgrade railway line on a Chinese credit line, for instance, happens to consist of two Chinese firms and one with ties to Lőrinc Mészáros, the Hungarian premier’s close friend and – by now – the richest Hungarian. Such projects might partly be the reason why Budapest has vetoed multiple EU statements regarding China in the Council, and that Fidesz MEPs were among the few who voted against the proposal freezing the ratification process of the EU-China Comprehensive Agreement on Investment in the EP. 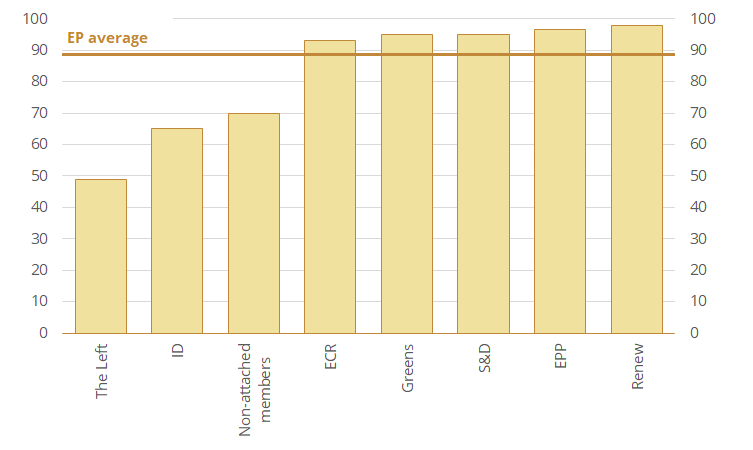 Moscow has proven to be more enticing than Beijing: Russia is often backed by both extremities of the political spectrum (The Left and ID) with their votes – although, generally, at least two-thirds of representatives still supported Kremlin-critical texts. While Russian politics is closer to the far right ideologically, the Putin regime has been highly successful in portraying itself as a superpower militarily, economically and politically. This can be attractive to both the far left and the far right, as they see the county as a counter-balance to the EU- and US-led western world that they reject. Moscow’s efforts to create the perception of itself as a superpower could also be the reason why some mainstream parties argue for “resetting” relations with the Kremlin. Moreover, Russia can rely on its energy resources, among others, which is why some rhetorically highly Kremlin-critical parties – such as the German CDU/CSU or the Austrian ÖVP – refused to back the Parliament’s multiple calls for immediately halting the Nord Stream 2 project. Moscow can also continue to rely on the cooperation of its old networks of influence, which might be the reason why the Bulgarian communist successor party, the BSP (S&D) is one of the most pro-Kremlin forces in the EP. 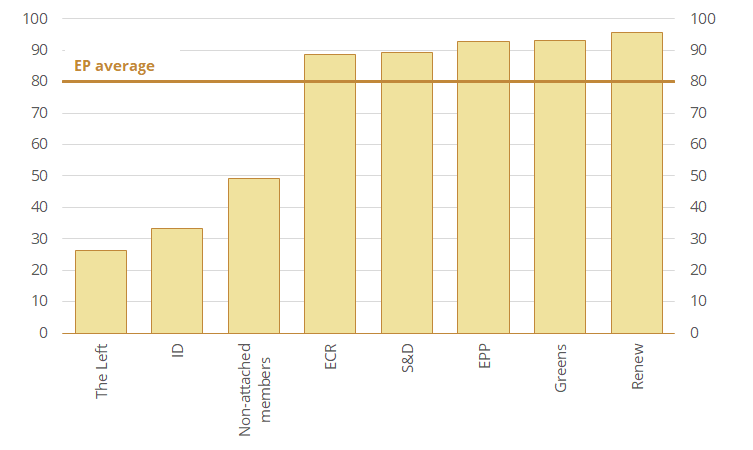 Support for action against authoritarian regimes outside of Russia and China was often almost unanimous. More than 80% of MEPs backed resolutions targeting the regimes of Alexander Lukashenko and Bashar Al-Assad. Over 90% of them supported texts condemning authoritarian practices in Chad, Haiti or Pakistan. At the same time, even mainstream parties refrained from condemning regimes “ideologically closer” to them: Members of center-left groups did not always back texts criticizing far-left regimes, such as Cuba, while right-wing groups sometimes avoided criticism of states led by rightist governments and policies that fit their own political agenda (e.g., regarding migration). 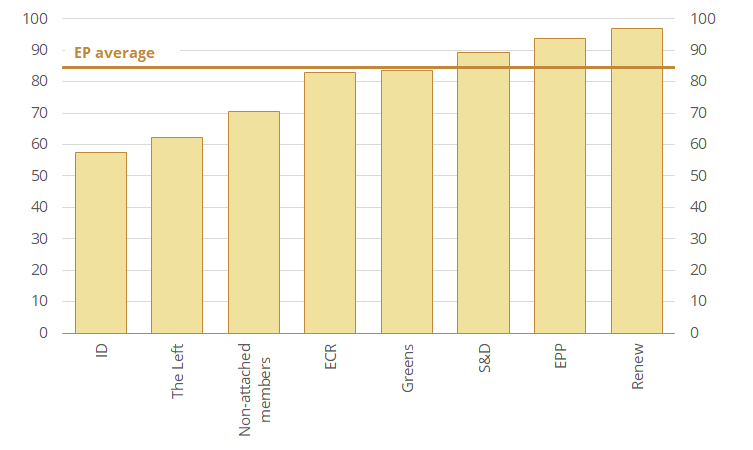 The fight against disinformation is a more controversial area. The ECR and the Greens were less likely to support proposals regarding this field than the other three mainstream groups. The leading force of the ECR, the PiS – for instance – declared on a debate concerning hate speech that disinformation was a serious threat, but the concept has become “politicized” in some cases, which might lead to the censorship of certain views diverging from the mainstream. The party, thus, would prefer focusing on media literacy education in combatting the threat. The Greens expressed concerns about the effects of proposals on the freedom of speech. For example, they wanted to hear concrete details on how social media platforms would be able to remove contents from their sites. Meanwhile, the extremities of the political spectrum repeated well-known pro-Kremlin narratives in plenaries in their arguments against these initiatives, accusing the Union of disseminating disinformation and propaganda. 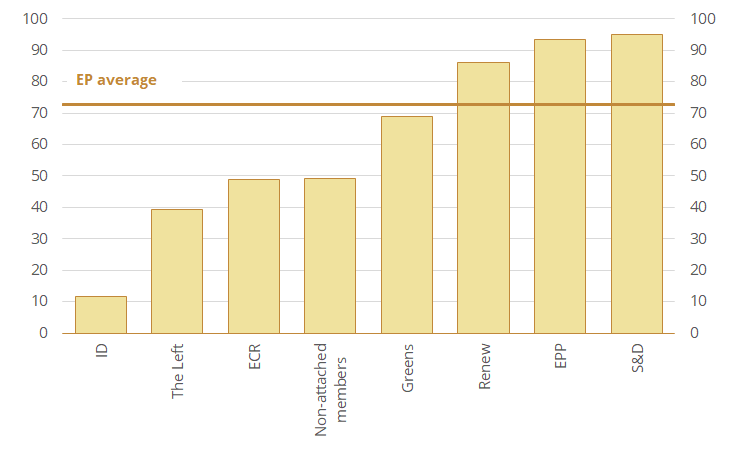 Formulating common EU foreign policy strategies will be the toughest challenge, as in many cases these texts were backed by the slimmest majorities, especially proposals advocating for even the limited use of qualified majority voting in the Foreign Affairs Council. The report on the implementation of the Common Foreign and Security Policy (CFSP) in 2020 was approved by just around 50% of representatives. The ECR has argued strongly against the introduction of qualified majority voting in foreign policy, emphasizing that it would weaken the lobbying power of smaller states. Ironically, the PiS criticized the EU for its ineffective responses to global crises multiple times, but opposes amending the current unanimity-based EU foreign policy voting system, which is often the main obstacle to swift and common European responses on the international scene. The Greens often argued in the case of texts on joint EU foreign policy strategies that their priorities are not being taken into account; for instance, the majority did not approve one of their proposed amendments deleting a paragraph on the EU-Mercosur trade deal from the 2020 CFSP text. 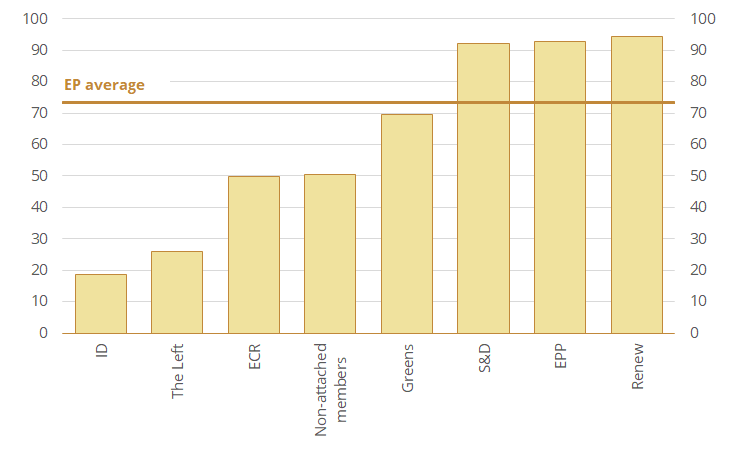 It is certain that one of the main foreign policy related points on the agenda of the Conference on the Future of Europe will be the limited use of qualified majority voting in the field. If this becomes a concrete takeaway from the Conference, member states would have a harder time rejecting the idea completely. Meanwhile, the European Parliament will remain the institution representing EU values the most clearly in global affairs, and it will strive to continue carving a stronger role for itself in European foreign policy.

For more information on methodology, further results, and a longer assessment of them, please see our thematic website. The recording of our event introducing project results and a discussion between MEPs Reinhard Bütikofer (Greens), Radan Kanev (EPP) and Katalin Cseh (Renew) is available here. Our study summarizing the results of the first phase of our project is available here.