Hódmezővásárhely: a historic defeat for Fidesz

The opposition victory in Hódmezővásárhely could have a significant effect on the public mood six weeks before the general election: it might encourage many anti-Fidesz voters who have been inactive so far to go to the ballots, but only if opposition parties manage to build an effective and unified campaign on what happened in Hódmezővásárhely. If they turn inwards and continue to do nothing but discuss cooperation, the opposition might easily miss this opportunity. Fidesz is going to wage an unprecedentedly forceful, hysteria-inducing campaign striving to scare opposition voters as well as mobilise its own camp. This could easily prove counter-productive. 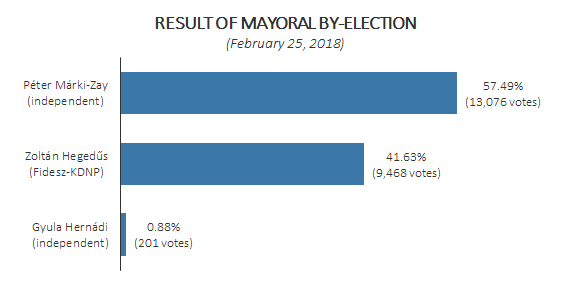 1. Fidesz has no antidote against the mobilisation of formerly inactive voters

The by-election in Veszprém (February 22, 2015) was the first significant by-election where the independent candidate, Zoltán Kész managed to mobilise more voters than the number of ballots cast on parties supporting him in the general election a year earlier. Then, Jobbik-affiliated candidate Lajos Rig repeated this feat (Tapolca-Ajka, April 12, 2015). Therefore, the model of beating Fidesz has been known for three years: if a locally well-known candidate stands in the election who the electorate considers capable of beating FIdesz, it overwrites party preferences. 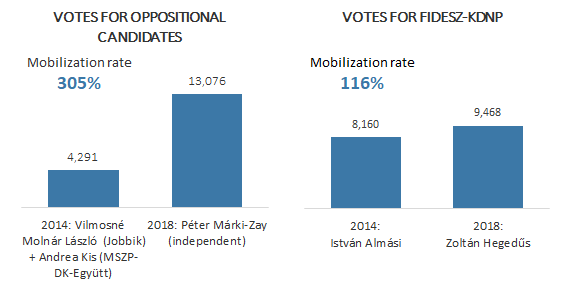 The novelty of the events in Hódmezővásárhely is the scale of the victory: the independent candidate backed by all meaningful opposition parties, Péter Márki-Zay gained over three times as many votes as the two mayoral candidates of Jobbik and MSZP-DK-Együtt together 3.5 years earlier. While nobody considered the 2014 candidates capable of beating Fidesz, the electorate thought Márki-Zay could do so. Thus, voters are wiser than parties believe they are: they are able to gauge whether there is someone towards whom they can channel their dissatisfaction with the government.

This is exactly what Fidesz lacks the antidote to. They are doing everything they can to keep the dissatisfied away from politics, but if they become politically active regardless of such efforts, the committed Fidesz camp would find itself in the minority. The question is whether the opposition can achieve this on the national level.

As a reminder: the 2014 general election showed already that the government’s huge advantage in terms of popularity does not mean that the governing parties are favoured by the majority of voters: the government earned 44% of the domestic vote, while support for opposition parliamentary parties altogether reached 52%.

2. Corruption is a slow poison that had an effect

The victory of the independent candidate backed by the whole opposition, Péter Márki-Zay is an extremely huge surprise because Hódmezővásárhely was one of the strongholds of Fidesz, the hinterland of Minister for Prime Minister’s Office János Lázár. Presumably, votes cast against the local candidate of the governing party were also votes against Lázár. Locally well-known corruption cases with ties to János Lázár, and the fact that he also became a frequently mentioned actor in the Elios-scandal of the prime minister’s son-in-law, István Tibocz – described by the OLAF report as a case characterised by the methods used by organised crime – might also have played a role in Fidesz’s defeat. János Lázár’s political positions within the party and the government are expected to weaken in the wake of this loss.

3. The strategy of opposition parties could change

So far, the movements of opposition parties have mainly been defined by

Subsequently to a change of government suddenly becoming a possibility, more effective coordination can be expected in single-member constituencies. It would be futile to expect 106 joint opposition candidates backed by all opposition parties and a joint list (especially because the period for fielding candidates ends on March 5), but coordinating the withdrawal of candidates with Jobbik might no longer be a taboo. The fact that this proved to be digestible in Hódmezővásárhely also means that the opposition can consider all single-member constituencies winnable.