Antigypsyism and Antisemitism in Hungary

In partnership with the Department of Social Psychology at Eötvös Lóránd University (ELTE) and in cooperation with Social Development Institute, Political Capital participated in a research project supported by the Foundation „Remembrance, Responsibility, and Future” (EVZ) in 2017. The project aimed at 1) identifying the specific mechanisms of antigypsyism and antisemitism triggered by social, political, economic and psychological factors; 2) evaluating projects (interventions) focusing on prejudice reduction; and 3) developing recommendations on how to fight antigypsyism and antisemitism. Within the framework of the project, the implementing organisations conducted a meta-analysis of published and unpublished works, reviewed international databases and assessed existing interventions, all related to antisemitism and antigypsyism. In addition, an online survey was conducted to test the connection between various variables that explain prejudice against Roma and Jewish people.

Please find the final report of the research here. 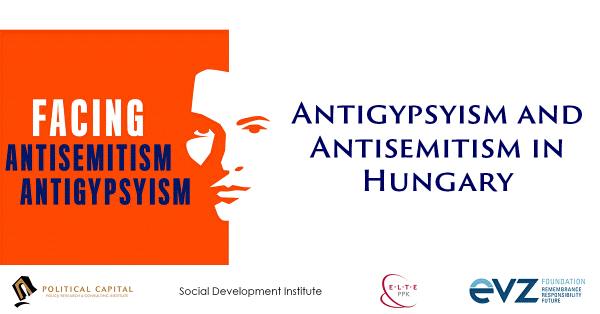 Key findings of the project

Antigypsyism appears as an overtly expressed form of prejudice consisting of negative stereotyping and strong negative emotions, and it is endorsed by a large proportion of society in Hungary. The level of antigypsyism in Hungary is higher than the European average, but comparable to other Eastern European countries.

Antisemitism in Hungary appears as a form of ideological bias based on stereotypes about too much influence and dominance, and Hungarians neither fully accept, nor fully reject these notions. Antisemitism is lower than antigypsyism, most Hungarians do not agree with antisemitic statements. Antisemitism is higher than the European average, but compared to other Eastern European countries it is relatively low.

The psychological antecedents of these two forms of prejudice are highly similar, suggesting that this mechanism is independent from the unique characteristics of the target groups. The main motivations for prejudice against both Jewish and Roma people is not the desire for dominance over these groups, but the need for a secure, stable, and predictable social environment. This ethnocentric perspective is developed because of a wavered sense of security that feeds conservative conventionalism, and the justification of punishing all non-conventional out-groups that appear to violate the norms or values of the national in-group.

The interventions dealing with antigypsyism or antisemitism can be categorized in the following groups:

The explicit goal of most interventions related to antigypsyism is enhancing Roma inclusion and integration through programs directed at the Roma. Prejudice reduction appears as a secondary goal of these programs as a result of positive intergroup contact.

Interventions related to antisemitism are mostly educational programs or campaigns focusing on directly shaping attitudes among receptive audiences, such as classroom discussions or voluntary participants of programs.

The main challenges faced by organizations working toward prejudice reduction:

The research project was realized with the generous support of the Stiftung „Remembrance, Responsibility, and Future” (EVZ). This summary and the study do not represent the views and opinions of EVZ. The views and opinions expressed in this article are those of the author.