Fidesz failed to gain two-thirds of the seats allocated to Hungary and its European position became unstable. The ruling party made a lot of enemies in the EPP, while its influence would diminish considerably if it sat in Salvini’s EAPN. Fidesz sacrificed its positions in the European Parliament on the altar of domestic politics with an anti-EPP campaign. Fidesz’s large (but not record large) victory is accompanied by it losing influence on the European level.

The consequences of the EP elections on the European level

The consequences of the EP election in Hungary 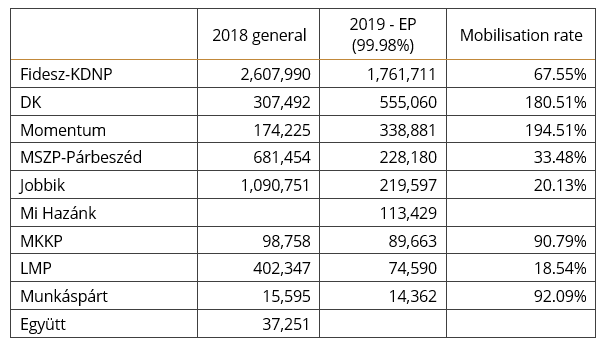 This analysis is available as a pdf document here.

[1] If the EC president was nominated without Emmanuel Macron’s support, it would constitute a massive domestic political and foreign policy defeat for the French president, who is personally against the Spitzenkandidat system. Although Macron never said he did not support Weber, he did say that a candidate for the EU job should have “experience at the highest governmental level or European Commission level” – which disqualifies the Bavarian candidate.