Populism and Russian influence in Europe

Last year, two historic events shook the West: the Brexit camp’s victory in the British referendum and Donald Trump’s election as the president of the United States. Both developments are symptoms of the political reorganisation in the frames of which traditional political dividing lines lost their dominance. The new division is between the establishment forming the political centre and the new populist wave threatening the status quo. The joint study of the Washington-based American Enterprise Institute and Political Capital examined the driving forces behind European populism and Russian influence exerted on the main political forces.

The study’s main conclusions are:

The full study is available here: 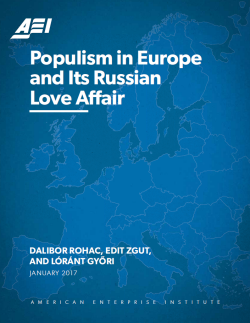