The Hungarian government’s disinformation campaign during the 2019 municipal elections

During the October 2019 elections, the government-organised media launched a massive disinformation campaign against the opposition. Although the opposition could achieve significant electoral gains by taking over the mayorships in the capital and some of the larger cities in the countryside, the pro-government media campaign was effective in mobilising the Fidesz’ electorate. Moreover, disinformation was likely to have exerted even more effect on people living in smaller municipalities and in the countryside, since they tend to consume traditional print media, radio and television channels more often, which are exclusively ruled by the government or its affiliates.

According to the Oxford Internet Institute’s 2019 Global Inventory of Organised Social Media Manipulation, Hungary and the Hungarian media space is a target of domestic state-led social media manipulation that utilizes both automated accounts (bots) and human operators in order to attack the opposition, distract from relevant problems related to the government and enhance already existing political, attitudinal divisions in the society. Consequently, the Hungarian government and the more than 500 private or state-led media under its control used all of their media leverage to launch a coordinated disinformation campaign that combined offline and online trolling, and conspiracy theories against the opposition during the October 2019 local elections. As part of this coordinated effort, many new “independent” or “civic” candidates also announced their bids. Many of them had suspicious ties to the governing parties and/or enjoyed the full support of government-controlled media in order to divide votes cast against the ruling party’s candidates.

The disinformation war waged by the pro-government media was preluded and/or accompanied by offline intimidation against the opposition parties and candidates, sometimes involving the police or electoral authorities, while the core campaign messages of the government were also disseminated with the help of the Hungarian pro-Russian fringe media network in the later stages of the campaign.

Physical intimidation efforts included the harassment of the opposition’s lord mayoral candidate Gergely Karácsony by members of Fidesz’s youth organisation and masked individuals, who disturbed one of Karácsony’s events by playing loud music from a boat. Music was used to silence Karácsony’s speech on multiple other campaign stops in Budapest. Offline trolling was taken one step further when a pro-Fidesz activist infiltrated the closed Facebook group of the campaign team of the opposition’s mayoral candidate in the capital’s 8th district. Documents acquired by the troll prompted a swift police investigation into the Pikó campaign’s allegedly illegal actions, for which authorities found no evidence, leading them to close the case. Other notable examples include the unlawful sanctioning of a Momentum politician by the police for trying to hold a press conference and unidentified or Fidesz-friendly activists ripping off opposition election billboards all around the country, etc.

Offline harassment incidents were accompanied by Fidesz’s online wartime rhetoric that depicted the party as a messianic saviour of Hungary and European Christianity against an opposition ready and willing to repopulate the country with Muslim immigrants.  As a result, the ruling Fidesz-KDNP’s main messages were not only inherently racist and of a far-right nature ideologically, it also employed a variety of conspiracy theories to attack the most significant candidates of the opposition.

The most successful type of media related the above-mentioned conspiracy theories were memes about immigration that were centrally disseminated by the official Facebook account of Fidesz and dutifully shared by dozens of local party affiliates’ accounts across the country. 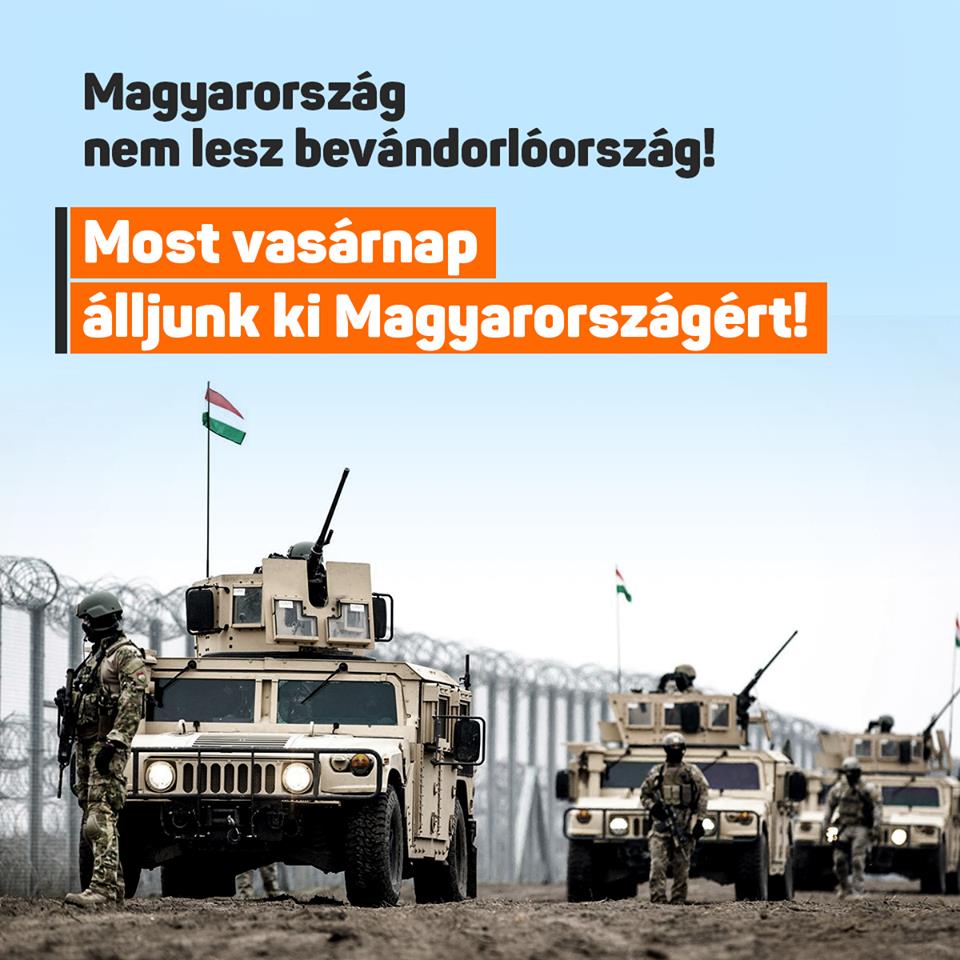 The meme and message reads: Hungary will not become a migrant country! Support Hungary this Sunday!/ Opposition mayors and candidates would resettle immigrants into the country. We can put an end to it at the Sunday municipal elections. Vote for Fidesz’ candidates! Source: Fidesz Facebook account