On 18 September 2018, Hungarian Prime Minister Viktor Orbán met with Vladimir Putin the seventh time since the beginning of the Russia-Ukraine conflict. The number of Orbán-Putin meetings (in comparison, Chancellor Merkel met Putin nine times in this period[1]) clearly shows that Hungary is punching way above its political and economic weight in terms of its perceived importance for the Kremlin. There are signs that behind closed doors there are problems with the Paks II nuclear power plant project, but PM Orbán presented Paks II as a “flagship” of cooperation between a NATO/EU member and the East. Hungary remains an important partner for Russia as a supporter, but also as a troublemaker for Europe, and Orbán can counterbalance his increasing diplomatic isolation in the West with a “good and predictable” relationship.

Vladimir Putin’s meetings with European prime ministers and presidents, 2014-2018 (ranked by the number of meetings) 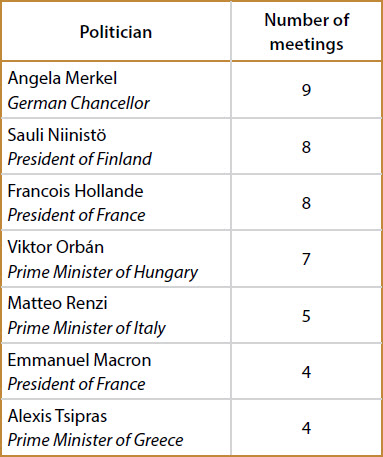 Five statements about the meeting:

[1] Including the Normandy talks on Ukraine.

[2] Turanism is a chauvinist ideology based on the false presumption of an old kinship between Turkic and Hungarian nations.

This Flash Report is also available as a pdf file.