We usually interpret Chinese influence on the supranational and national levels. However, Chinese subversive efforts are much broader than that, frequently aiming for the subnational sphere, including individual provinces and towns. One of the key tools for China to achieve its goals is sister city agreements, which are instrumentalized by the regime in Beijing to achieve certain goals. These were the main takeaways of one of the panels of the Budapest Forum featuring International Republican Institute advisor Matt Schrader, Global Analytics chairperson Rumena Filipova, German Council on Foreign Relations senior fellow Didi Kirsten Tatlow, and Prague Mayor Zdenek Hrib. 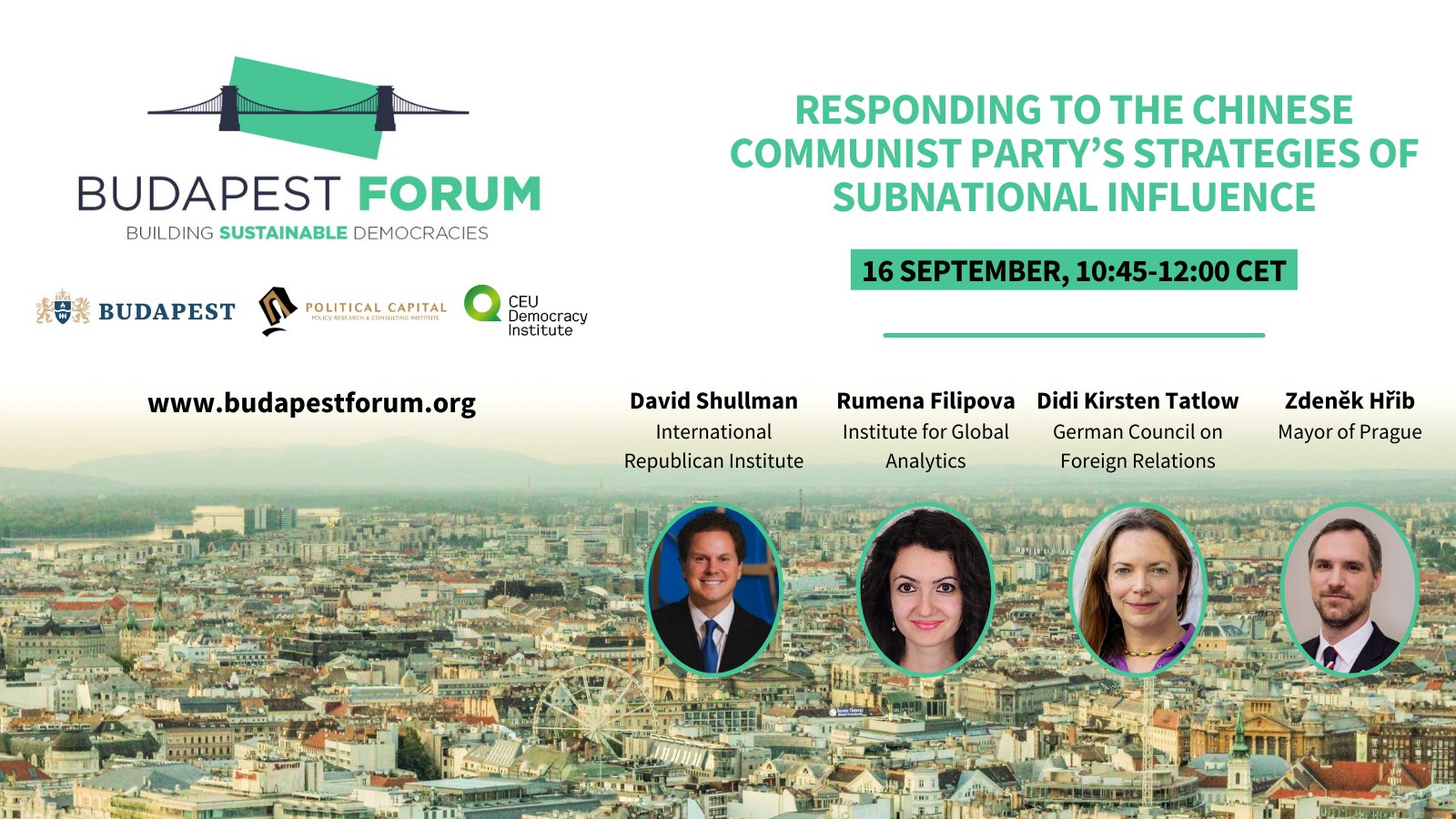 The concept of sister city agreements seems to be a highly innocent one on the surface, but if one examines the concept from China’s perspective, it is something that they seek to instrumentalize to achieve certain goals – said Did Kirsten Tatlow during a panel discussion at the Budapest Forum. She highlighted that it is run by the Chinese People’s Association for Friendship with Foreign Countries (CPAFFC), which, as highlighted by Matt Schrader, is overseen by the Chinese Ministry of Foreign Affairs. In Germany, the CPAFFC contacted a music organization in Mainz to ask them if they wanted to host a traditional Chinese music event. This was followed by numerous exchanges, including invitations to various business-focused events that – over the years – led to the creation of the Federation of German China Friendship Association. One time, the CPAFFC even complained to the association that they are their unofficial contact to German politics, so they are expected to establish more sister city relationships in the country – highlighted Tatlow.

The instrumentalization of sister city agreements does not stop solely at building personal, professional, or business networks and creating opportunities but to achieve political goals as well. Prague Mayor Zdenek Hrib noted that his municipal administration believed that an article in the Prague-Beijing sister city agreement simply did not belong in such a treaty, namely the article on Prague agreeing to the One China Policy. The Czech capital’s request to have it removed met with considerable animosity from the Chinese side. The process went from Beijing simply ignoring dialogue with Prague to open threats of economic damage to the Czech city. These threats mainly involved the trickling out of Chinese tourism to the Czech capital, but – as the mayor said – even if no Chinese tourists arrived in Prague, the city could harbor it. Zdenek Hrib emphasized that economic effects of standing up to China are usually overexaggerated. He said that the result of China’s threats over the Czech Senate president’s visit to Taiwan was a Chinese company cancelling an order of 11 pianos, which were soon purchased by a Czech businessman and donated to schools.

The mayor of Prague noted that risks of a close relationship with China are nowhere as obvious as in the case of electronic devices. When a Czech governmental body issued a warning against the use of Huawei and ZTE devices in critical infrastructure, his municipal administration checked local infrastructure and found no such devices but emphasized once again that governments should stand up to their values even in the face of mild economic losses.

Governments, whether local or national, do not only have the CPAFFC to worry about. Matt Schrader explained that there are several Chinese bodies that are used to exert Chinese influence. One such organization is the United Front Work Department, a part of the Chinese Communist Party, seek to take various cohorts of Chinese society and turn them into the propagators of the party’s goals. Initially, they were focused on domestic actors, but this has been extended to external actions, too. The International Liaison Office keeps contact between the CCP and foreign political parties outside of government. He added that the People’s Liberation Army is also crucial in this regard, as it does very important influencing and intelligence work. Thus, China is working with a whole-of-society approach, but Matt Schrader highlighted that Beijing does not always get what it wants. There are numerous ordinary Chinese people who are entirely outside of politics, and even state-owned businesses do not always do what the CCP wants, as they have to make money, too. Therefore, he suggested that there needs to be more extensive research on how exactly these structures work to assess exactly how much of a threat they really pose to democratic societies. Multiple panelists mentioned that expertise on these issues is lacking, so research into this must be financed.

China’s attempts to influence all levels of society are visible in Bulgaria – said Rumena Todorova. For instance, there is a great interest among the political elite for friendship associations with China in Parliament. They make business investments into the Bulgarian economy, albeit they take a very little risk when doing so to allow themselves to leave the market if their endeavor turns out to be unprofitable. Chinese delegations try to build relations with local journalists. China also cooperates with localities through, among others, sister city agreements, and during the COVID-19 pandemic, China offered masks to Bulgaria through these local contacts.

Other recommendations included a turn towards the example of Australia, where two local businessmen from China turned into the largest donors of the two large domestic political parties, set up think tanks, or used the money to support local organizations. The problems this network-building created came to a head when a Labor party politician repeated Beijing’s lines on the South China Sea at a press conference for Chinese-language media. This event, among others, prompted a review of Australia’s China policy, which led to a ban on donations to political parties from non-citizens and a review of the connections of Australia’s university network. Panelists noted that transparency of lobbying laws would be key, not only on the national but the EU level as well.

Another recommendation was for local municipalities to ask for advice, analysis from the government, their partners, and experts to be able to better prepare and resist Chinese influence.

Overall, the discussion had three key messages. First of all, Chinese influence is as serious a problem on the local level as it is on the national level. Second, China is very good at selling the perception that it can punish partners economically if they speak out against Beijing’s interests, but these threats are generally overblown. And third, the international community and all levels of government must do more to counter this threat, starting with funding research into how serious the problem is exactly.