Beyond Dystopian Visions: Social Media for the Public Good

We were using social media platforms for years without recognizing their true nature and, then, we blamed them for human nature and our own democratic institution’s shortcomings. We need to have better understanding of the digital era and separate platforms for building trust, communities, and consensus.  These were the main takeaways of a panel of the Budapest Forum consisting of Gianluca Misuraca, founder and vice president of Inspiring Futures (IF), Dr. George A. Tilesch, president of the PHI Institute for Augmented Intelligence, Jamie Bartlett, author and former senior fellow at Demos and Shan-Shan Huang, deputy mayor of Taipei City.

First, panelists noted that although social media platforms are causing challenges, they were not conceived with an evil intent. George Tilesch said that Mark Zuckerberg does not strive for world domination, he simply created a highly sophisticated monitoring and micro-targeting advertisement system and while social media platforms came with a “side effect” of connecting people, they were certainly not intended or designed to become public spaces to discuss our common issues. George Tilesch believes that the business models of these platforms are completely incapable to serve the public interest because they were created with the sole purpose of making money. The fact that we use these platforms for political discussion is only making it worse and concentrating even more power in the hands of a very small group. Gianluca Misuraca added that the business sector is not inherently evil, but it has its own interests. When these systems were created, we still thought that human and civic thinking was rational. We now know that this is not the case at all. Jamie Bartlett thinks that knowledge of human nature is key here. We need to admit that our own biases are much stronger than anything Google can create. Gianluca Misuraca pointed out that while everyone is talking about the negative side of social media, he tries to see the good in it. He believes that social media platforms have great potential for providing information and reaching the public more efficiently. The COVID19 pandemic showed us the threats we face on these platforms, but he continues to be an optimist regarding the possibilities technology can provide us with.

There are some good examples of cities using social media for the public good. Shan-Shan Huang, the deputy mayor of Taipei City told the panel the city’s experience: From the end of 2019, Taiwan was at the forefront of combatting the COVID pandemic, and Taipei City was forced to turn towards innovative solutions to fight the pandemic. City leaders and authorities started to use social media en masse to provide official information and guidelines to the public in a quick and efficient manner. Every relevant official event, meeting, pandemic progress report and government documents had been made available through social media platforms.  This way these platforms were a critical tool in the fight against fake news, as the mayor used them to dispel doubts and correct misinformation that was being spread. Long articles were shared on Facebook and quick, easy-to-understand information on Instagram, so that young people could quickly understand the situation. This was also necessary because the pandemic meant that the number of participants in press conferences had to be limited and this way everyone else could follow them via livestreams. At bigger social gatherings, the city used big data solutions to examine and monitor the flow of people, while residents were kept informed about policies and data usage, as their data was only used during the events and automatically deleted thereafter. According to the deputy mayor’s testimony, social media has made a significant contribution to the fight against the epidemic and allowed greater transparency and accountability of government. 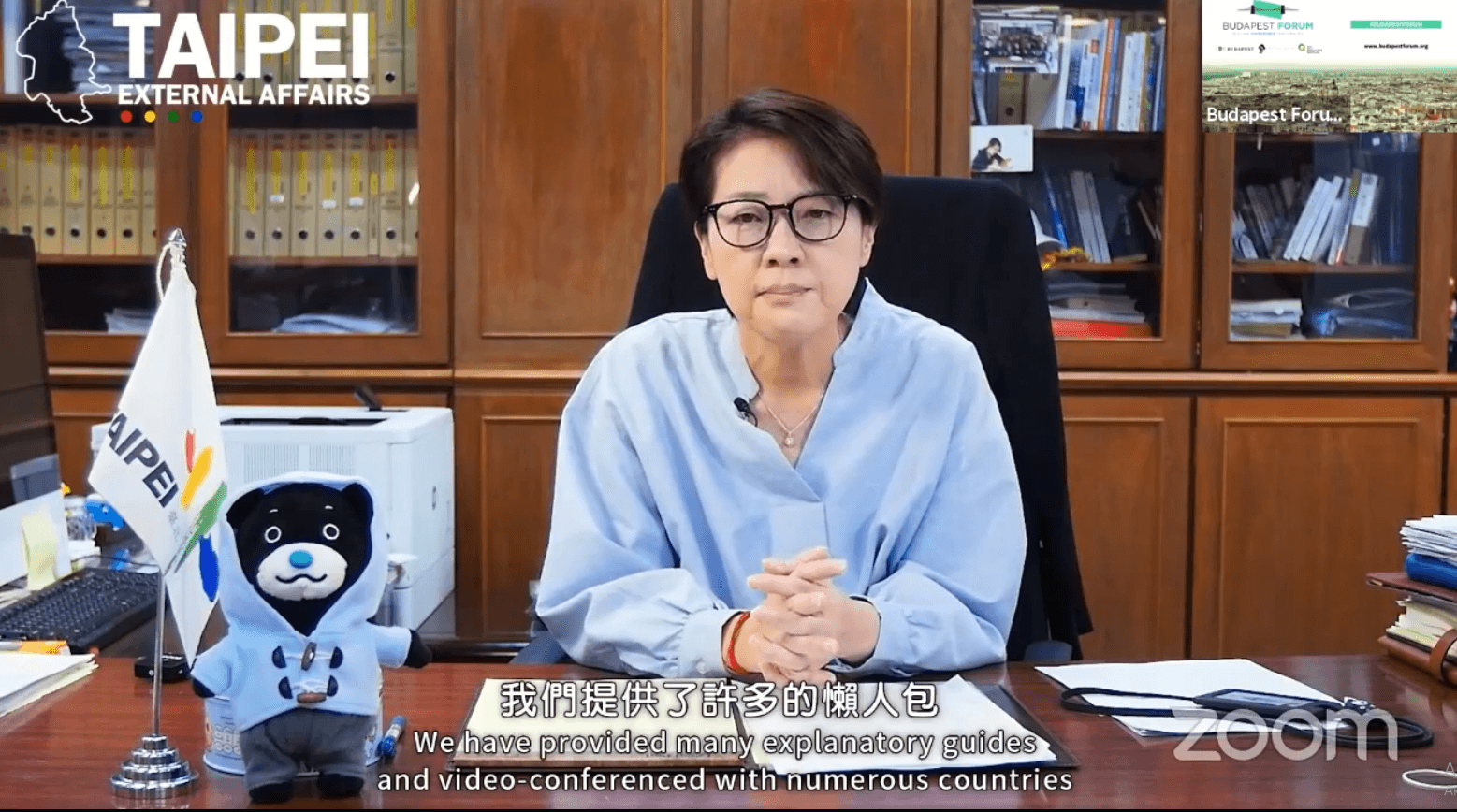 The reality is that the world works in an analogue way, so the rules and norms of society and our institutions are incompatible with the digital world, says Jamie Bartlett. Democracies work best when the people know where power lays. The digital world lacks this needed transparency that make our democratic institutions work. This lack of transparency comes from both the inner workings of these platforms, but also from the limited user skills and knowledge of citizens. George Tilesch added that we live in a trust-deficit environment, but democratic institutions must be based on trust. Research shows that the more we use these platforms, the less willing we are to compromise and change our minds. We do not trust institutions, expertise, or each other. Social media platforms either knowingly exploit this distrust or just don't care that they do. Politicians say that political tribalism is a side effect of social media, but it is far from the whole picture. We need to thoroughly understand the flaws in the current systems and address them one by one.

George Tilesch recommended that we fundamentally change the ways we use these platforms because the platforms themselves are unlikely to chance significantly. He also noted that while Hungary is leading Europe in the number of users on social media (per internet users), the necessary knowledge and education for digital self-protection is completely missing from the education system. They agreed that education is key here. Not just basic, user skills type education, but more thorough training on how and what to use these platforms for.

Besides training, they recommended a rethink of not just platforms and the digital environment, but our whole institutional system as well. We cannot just digitalize our government; the entire institutional framework and election laws must be overhauled, too. Some form of a digital Agora must be created.

We know the problems, but we do not seem to agree on how to solve them so it would be nice to redesign these platforms, but no one really knows how to – said Jamie Bartlett. It is especially true when it comes to the government’s role in it. In Gianluca Misuraca’s opinion, social media and other emerging technologies should be regulated on a European level working alongside like-minded nations.

Panelists pointed out that if a government would create an alternative social media platform, probably no one would use it, but George Tilesch said that cities like Taipei have a special role to play in renewing democracies, creating platforms that are more like Greek agoras than the current systems. Taipei sees opportunities in community-building and consensus-building. The role of cities is not necessarily to solve problems, but they can play an important role in sharing good initiatives with citizens and explaining the right approach, representing democratic values – he added.

We do not need to transform current social media platforms, but rather design something completely different. More time and energy should be spent at the drawing board and create a platform that fosters consensus, builds trust, and reinforces civic discussion. Governments need to persuade companies to create versions of platforms that meet the public interest. At least 10-20% of the R&D budget should be spent on creating platforms for community building. It doesn't have to be the next big thing and achieve a billion users overnight, but it must build trust and be transparent – said George Tilesch. 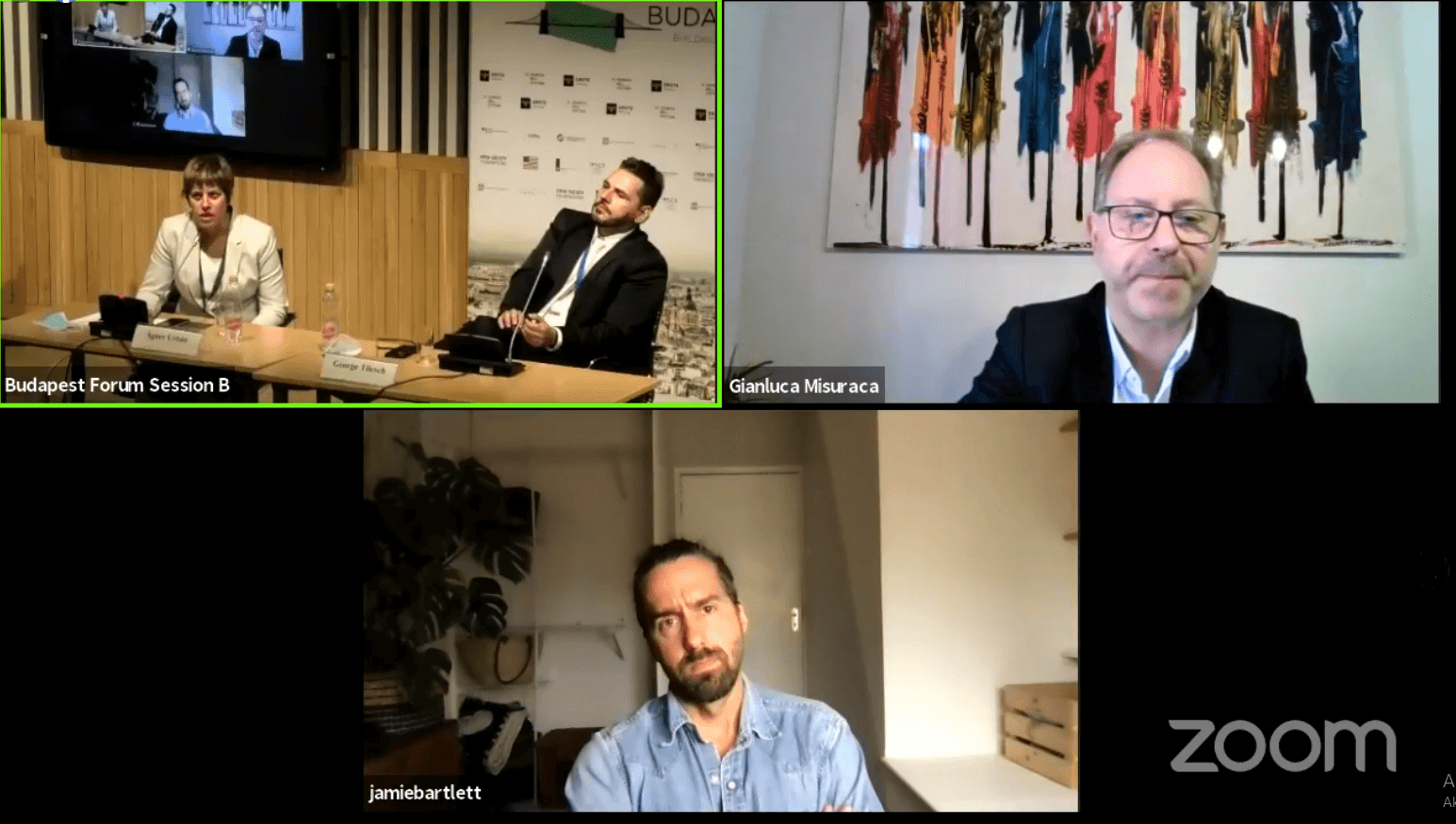 James Bartlett was a bit skeptical because, in his experience, extremist groups would be fast to exploit every new system or platform. It is not the good guys who are efficient in building communities – said Bartlett referring to British far-right groups’ activity on social media platforms before the Brexit vote of 2016. It is way easier to make people believe that everyone is cheating than to make them understand how these systems operate. And although he believes that democracies are capable of evolving, he worries that it might be too slow.

In the end, the discussion had three key messages. First, we cannot use advertisement-based social media platforms effectively for democratic debate and community building because they were not designed to become public spaces, but for generating profit. Second, we can only blame these platforms partially for our problems, because ultimately, they did not create our bad instincts and biases, they are merely reinforcing and exploiting them constantly by design or by accident. And third, for these reasons we need separate social media platforms for trust, community- and consensus-building on a local, national, and international level.