There is no democracy without differences of opinion. But democracy also fails if these disagreements turn extreme. The real question is where the borderline is between constructive debates and confrontations undermining democracy. To find the answer, one must dig deep to understand even the personal and group-level emotions since these are the primary factors fuelling tribal thinking. Reversing polarization requires it is, among others, necessary to return the focus of politics towards issues and policy debates, strengthen institutional control mechanisms and increase the number of civil society initiatives. A big unknown, however, is the attitude of voters. These were the main takeaways from our panel on polarization and tribalism, organized by Political Capital, the Municipality of Budapest and the CEU Democracy Institute.

During a panel discussion moderated by Political Capital director Péter Krekó, Georgia State University professor Jennier McCoy started by introducing the definition framework of the phenomenon. As long as we view polarization as a difference of political opinions, it is natural to consider it a necessary element of the democratic political system. However, it can become pernicious once it reaches the level of extremes, creating two mutually opposing and dangerous political camps. “This is a process that simplifies politics into binaries, but this is also a political strategy that is actively exploited by politicians for their own sake. Voters are forced to choose between groups,” Professor McCoy told the audience of the Budapest Forum, adding that the problem is largely connected to identity-based social differences, and it can become increasingly dangerous as countries reach elections.

Emphasizing the links between disinformation and polarization, Peter Pomerantsev, a Senior Fellow at the Johns Hopkins University SNF Agora Institute said the basic idea from political parties, in this case, is to “dehumanize” their opponents. Disinformation helps to strengthen tribal identities. “This is a phenomenon of both demand and supply: not only politicians deliver disinformation, but members of a certain tribal group are actively looking for news that strengthens their own identity.” 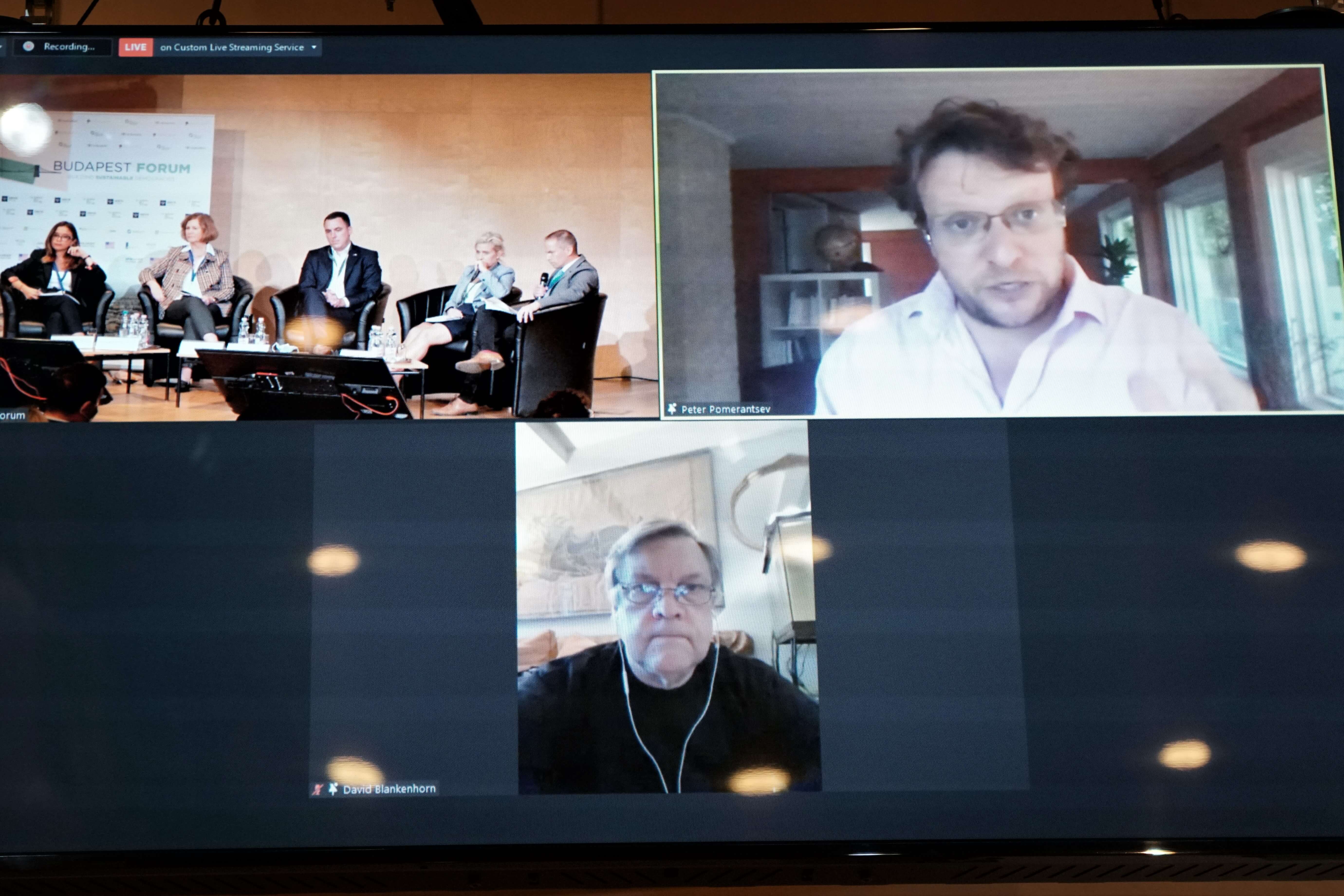 The aftermath of the 2020 US presidential elections served as a useful reminder of the dangers of pernicious polarization. In this regard, David Blankenhorn, the Founder of the Institute for American Values emphasized that polarization in the United States is not centered along political and social issues. According to him, issue-based differences are undoubtedly present, however, the emotional and personal level of polarization is more telling. “It is not about that I disagree with you, it is about that I do not like you,” Blankenhorn said, illustrating how the issue materializes on the personal level. In her response concerning the US, Professor McCoy said the personal level of polarization is, indeed, troubling. When it comes to the institutional level, the two parties of the US political system are more and more unwilling to make compromises, just as their voters, despite the tradition of bipartisanship. The social level of polarization is symmetrical due to the equal level of distrust in Republican and Democratic voters, while the political level is rather asymmetrical. According to her, it is the Republican Party that primarily tries to benefit from confrontations and obstructionism to increase its popularity.

Discussing the example of Turkey, Senem Aydin-Düzgit, professor of international relations at Sabanci University, argued that polarization goes back to the formation of the Turkish Republic, when secular elites stood against the religious and rural masses. Today, actual polarization in Turkey is due to the Erdogan system, however, she stressed that this has not always been the case. Erdogan maintained an inclusive political profile for years before gradually starting to build on identity politics and culture war, which he used successfully during most elections. This came with a concerning level of democratic backsliding and a more visible level of tribalism that is widely present on the personal level, as around 75% of Turkish people do not want their children to marry people from families supporting the opposing political side.

Although polarization is often considered a feature of the developing world, Marlene Wind, the Director of the Center for European Politics at the University of Copenhagen noted it goes beyond these countries. Denmark is often viewed as a country that is more united politically and socially, while the country is consumed by tribalism. According to her, this especially applies for the country’s social democratic leader, Prime Minister Mette Frederiksen, who claims that “only she can protect the Danes.” An important feature of polarization in Denmark is that it is largely professionalized, that is, experts are the ones creating carefully planned political narratives and identity profiles that could divide the society. “In Hungary and Poland, the us vs. them conflict is rather strong on the surface but what really matters is what happens below the level of polarization,” she said, highlighting the potential abuses of power that are hidden by identity politics.

The panel was also joined by Ivan Vukovic, who offered a mayoral perspective from the Western Balkans. According to the Mayor of Podgorica, who is also a CEU alumni, the Balkans have always been the main venue of identity-based conflicts, particularly 30 years ago. It is why the term balkanization was invented - to describe such conflicts that come together with an extremely high level of political and social instability. Vukovic, however, said that the region is in a much more stable situation in a 30-years comparison, although the phenomenon is still highly prevalent. He brought the example of Montenegro, where the country, according to him, was run by a government until 2020 that supported full independence from Serbia. At present, the country is run by an unstable, officially pro-EU but, in practice, a pro-Russian coalition that, according to him, is controlled by the Serbian Orthodox Church and influenced by the Serbian government. Consequently, polarization in Montenegro today is between those aspiring for Europe and between those who want to bring the past back. 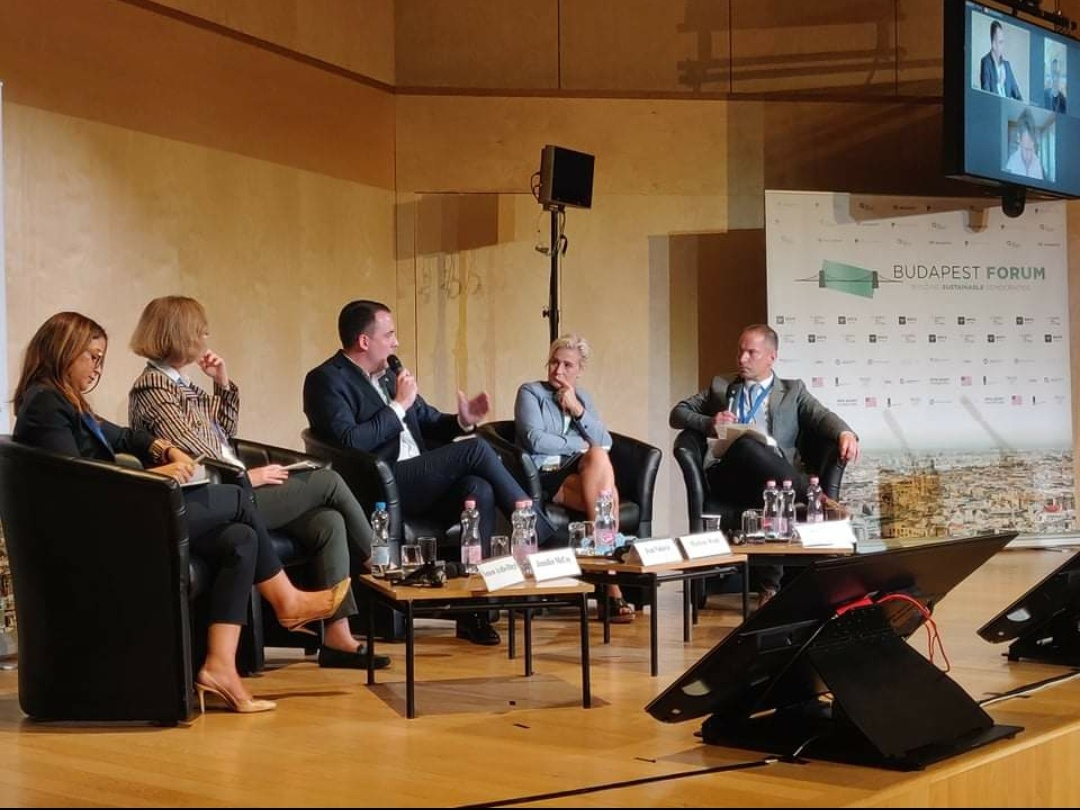 How to stop polarization

According to Pomerantsev, the example of the 1990s shows how significant role the media plays in increasing the level of polarization. He offered the example of former US President Bill Clinton and former US Speaker of the House Newt Gingrich, who managed to get along but the media contributed to the change in the relationship of the Democratic President and the Republican House Speaker, as well as of their parties, since it was rather interested in confrontation. “The solution is to return to issues-based politics. The US primaries are a reality show rather than an actual debate of policies,” he told the audience. The point is to define politics around issues and not personalities and scandals.

Discussing potential solutions, Aydin-Düzgit said the Turkish opposition was already experimenting with possible methods to decrease the fracture lines in society. Opinion polls show societal consensus in fears (such as from poverty, unemployment and similar matters), driving their agenda. In terms of political communications, the Turkish opposition is trying not to fall into Erdogan’s identity trap, meaning they aim to talk to the opposing side with respect, not to increase the possibility of identity-based confrontation.

According to Blankenhorn, it is unlikely that solutions to tackle pernicious polarization will come from the top of the political establishment. This is why society needs more initiatives from the civil sector and NGOs. Offering his take, Vukovic stressed the importance of the crisis of political leadership. He stressed that authoritarian politicians have become more accepted and authentic, which increases their popularity.

As told by Wind, it would be better if politics and the media were “more boring” and “less drama.” She brought the example of Germany and outgoing chancellor Angela Merkel, who is believed to be less characteristic but is definitely more trusted. In her view, Professor McCoy stressed the significance of checks and balances, as well as other institutional control mechanisms, however, added that even these can be abused by political parties.

Closing the discussion with his commentary, Thomas Carothers, the Interim President of the Carnegie Endowment for International Peace highlighted three takeaways from their research results on polarization. First, polarization is a problem all around the world. In Latin America, it is a battle of classic political ideologies (the left and the right), especially in Brazil and Colombia. In Southeast Asia, the main issue is rather connected to religion and ethnicity, while the phenomenon is not that much present in Taiwan, Japan and South Korea, adding that these are the countries that “we should be looking at.” Second, the COVID-19 crisis did have the potential to increase societal cohesion but the opposite was recorded in the United States, unlike in India, where the pandemic did not have that much of an impact on local polarization. Third, societies need to adapt to new approaches: a political strategy, an opposition strategy and a media strategy (with less confrontation), while it is also essential to improve the rule of law and develop civic culture.