COVID-9.11: The transformation and anti-West radicalization of the Hungarian antivax movement

This project is a months-long media research project supported by the International Republican Institute’s (IRI) Beacon Project. Our research looked at the transformation of the Hungarian anti-vax movement from a small, parents-led community into a hyperactive, network-building movement mainstreaming disinformation and conspiracy theories. The opinions expressed here are solely those of the author and do not reflect those of IRI.

Using qualitative and quantitative approaches of narrative and statistical, network analysis, Political Capital revealed how the Hungarian far-right and pro-Kremlin subculture contributed to the radicalization of the anti-vax discourse and audience, which became both the recipient and producer of anti-West, more specifically anti-US narratives and conspiracy theories related to the COVID-19 pandemic.

The data-sets used in the media research were generated using the SentiOne and CrowdTangle social media listening platforms, used to monitor and collect historical media data present on Hungarian fringe anti-vax and far-right/pro-Kremlin webpages and Facebook pages, groups. After a manual compilation of the top 30 far-right/pro-Kremlin and 39 anti-vax fringe sources based on snowball sampling, we monitored their operation between 1 January 2020 and 1 June 2021 through a pre-set of keywords to identify and collect any relevant communication in the forms of articles, posts or comments related to the COVID-19 pandemic or the vaccination programs.

The coronavirus pandemic in Hungary created an infodemic unprecedented both in its scale and nature, which was used by a new strain of antivax experts to push their disinformation narratives and anti-West conspiracy theories.

The pro-vaccine communication of the Hungarian government has not only neglected the new anti-vax movement for months to bash the political opposition alleged “anti-vax position,” it also failed to successfully reach out to a portion of Hungarians after government-controlled media’s years-long peddling of (political) conspiracy theories, now fuelling distrust in the Hungarian political elite and mainstream media.

Some of these theories, such as one detailing how the Director of the National Institute of Allergy and Infectious Diseases in the US, Anthony Fauci’s family is financially benefitting from their cooperation with the Bill and Melinda Gates Foundation or another one about Bill Gates, Henry Kissinger or George Soros executing a “eugenics” plan under the disguise of the new pandemic, were distributed by renowned Hungarian pro-Kremlin conspiracy pages, known for their disdain for the West. However, the new Hungarian anti-vax movement became quite swiftly an independent producer of its own disinformation narratives, judging by the fast-increasing number of messages produced by the new anti-vax fringe media from January 2020 onwards – as displayed on the graph below.

The weekly number of Facebook posts/articles dealing with the coronavirus in anti-vax fringe media between 1 January 2020 and May 31, 2021

Source: Own calculations based on SentiOne data.

The key metrics of the ten best performing Facebook posts on the anti-vax media list showcase the generational change that underpinned the radicalization of the anti-vax discourse that made the leader of the new antivax movement, Dr. György Gődény,a pharmacist by profession, one of the most successfully anti-vax influencers on Facebook by the second half of 2020.

Key metrics of the ten best performing Facebook posts on the anti-vax media list (interactions  = total number of shares, comments and all types of reactions)

A detailed analysis of pandemic-related articles or Facebook posts produced by any fringe media on our anti-vax and far-right/pro-Kremlin lists between 15 and 29 February 2020, as well as between 18 May and 1 June 2021 revealed that the antivax movement used mostly anti-government and anti-US conspiracy theories to mobilise everyday Hungarians online and offline against government-mandated vaccination programs and preventive measures, while far-right communication relied more heavily on Eurosceptic and pro-Russian narratives to spread anti-West messages about the pandemic, as seen on the infographic below.

Source: Own calculations based on SentiOne data. The top five narrative types within the “activism” category could not be named since we only categorised a total of four subnarratives. The far-right conspiratorial subnarratives numbered six instead of five due to the equal ratios of two different narratives.

In the end, the Hungarian far-right and antivax movements’ rivalry for the same anti-government and anti-establishment electorate and audience significantly contributed to the vaccine-sceptic attitudes in Hungary, with only 66% of the adult population being fully vaccinated (compared to the EU average of 75%).

The Hungarian public sphere filled with anti-West political or pandemic-related conspiracy narratives, governmental communication supporting the “humanitarian assistance” of Russia and China, and Sinopharm or Sputnik V jabs received from the Kremlin or Beijing may very-well contribute to the positive image of foreign autocratic powers in the long-run.

Our network analysis has revealed that mainstream and fringe pro-government sites are essential in establishing any contact between Russian sources and the Hungarian anti-vax movement, since Kremlin mouthpieces are referenced or relayed by rightist Hungarian media, such as the pro-government fringe Vadhajtások or the pro-Kremlin Moszkvater.com operated by foreign policy journalist Gábor Stier, as seen on the graph below.

The pro-Kremlin clusters of the antivax graph (node size is proportional to the number of connections or edges; k-core = 2) 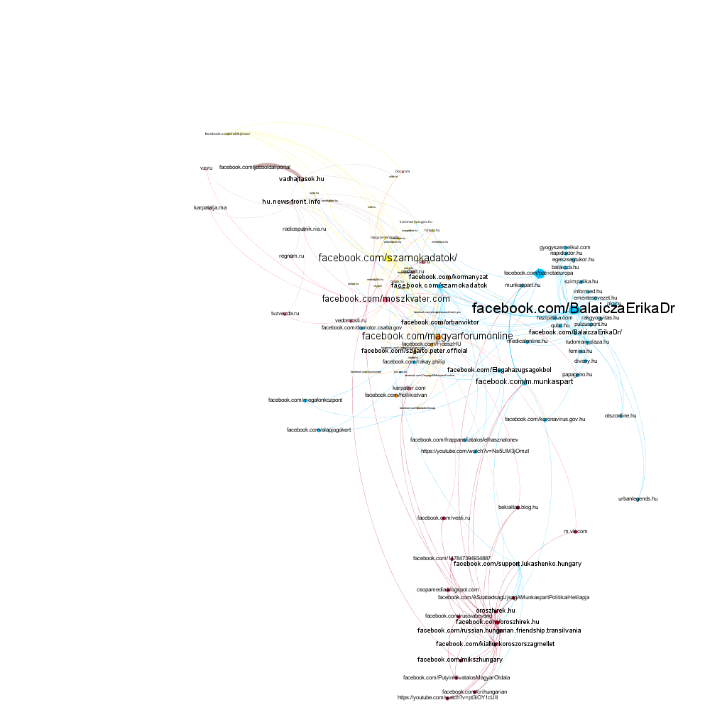