With the support of the Friedrich Naumann Foundation for Freedom, Political Capital implemented a project called ’Impact of the COVID-19 pandemic on the far right and the populist radical right in the V4 region’ in 2020. The aim was to investigate the narratives around COVID-19 and their impact on the political discourse in the Visegrad Group countries (Czechia, Hungary, Poland and Slovakia). With the help of our national partners, the Institute for Politics and Society from the Czech Republic, the Institute of Social Safety from Poland and the Institute for Public Affairs from Slovakia, we executed the research during the first wave of the pandemic, from March to August 2020. The investigation focused on three aspects: national circumstances, main narratives and policy initiatives. The examined actors were populist radical right and far-right actors, which meant more specifically, in some cases, both governmental and fringe actors. The used sources were written and oral statements, announcements and speeches of the examined actors, such as mainstream, populist, anti-democratic and far-right parties, politicians and opinion leaders (e.g., relevant public figures, pundits).

Each country implemented strict lockdown measures to protect their citizens in March. While Slovakia and the Czech Republic were the first ones that implemented such measures, Hungary followed suit only two weeks later. The ruling parties in Poland and Hungary used the situation to strengthen their political position and power, and to weaken the opposition. In terms of health effects, the V4 countries were not affected by the first wave of the pandemic as strong as many Western European countries. However, the economic effects were quite serious, especially Hungary.

When comparing the narratives, which have been prevalent in the four countries, we have identified five main argumentation patterns that have mainly been present across these countries. These were the anti-West & anti-democracy vs. pro-East & pro-autocracy narrative, the global control narrative, the anti-vaccine narrative, the anti-migrant narrative, and the sceptical narrative. In addition, we have found one strong narrative, which was utilised in Hungary mainly, the anti-opposition narrative. While it was mainly fringe far-right actors and disinformation platforms that spread harmful and conspiratorial narratives in the Czech Republic and Slovakia, ruling parties and the mainstream media linked to them played a key – sometimes even the major – role in the dissemination in Hungary and Poland. 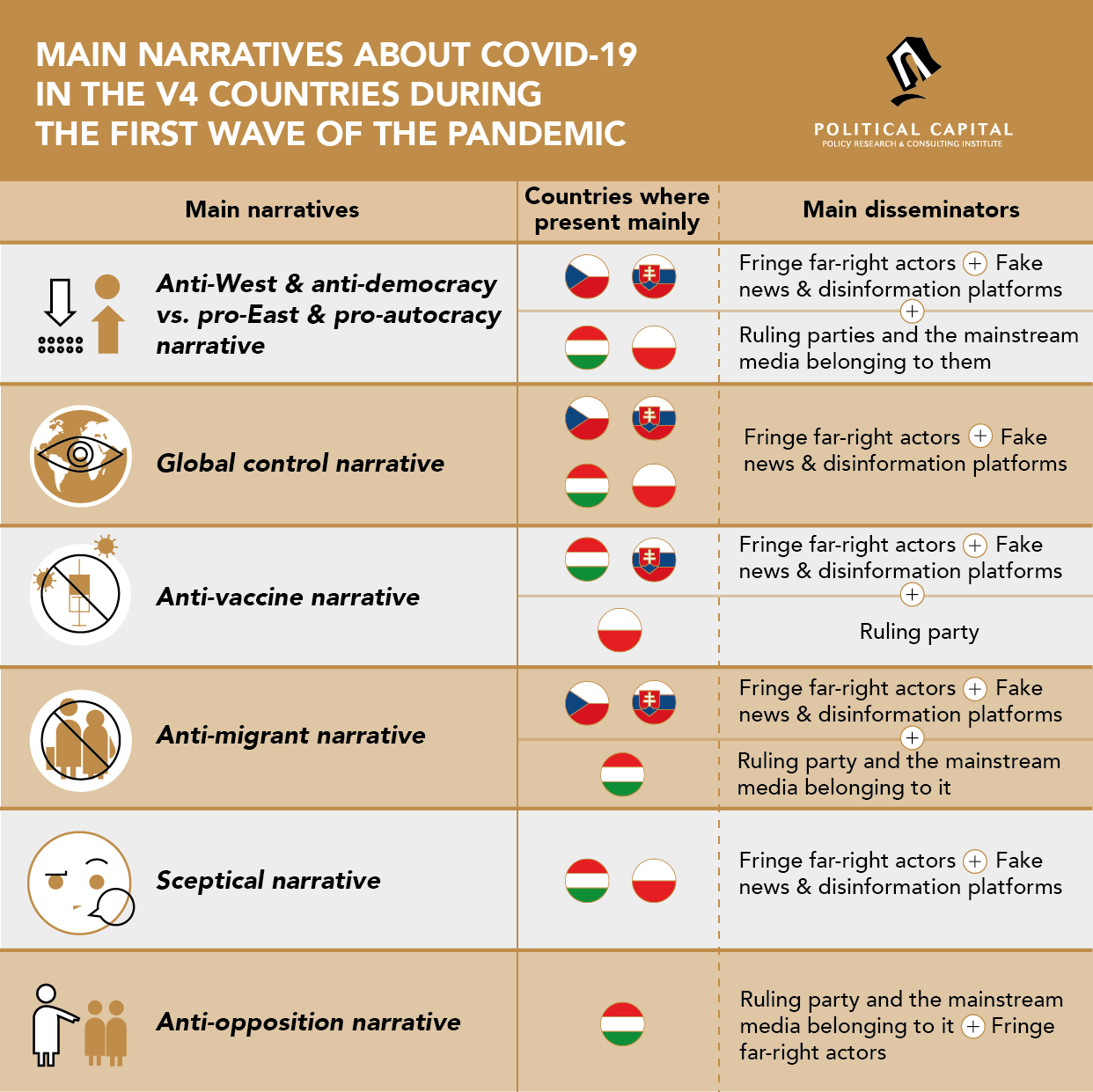 Possible solutions to the spreading of these narratives would be proactive, factual, clear and transparent communication and policies by governments and authorities. These play a key role in countering harmful narratives, conspiracy theories and distrust.

Various materials related to research are available as follows: