The results of Demos’s survey (in line with traditional representative Hungarian survey data) challenges the general stereotype that simplistically depicts Jobbik supporters as the “losers of the transition”: the poor, unemployed, undereducated people. The results show Jobbik Facebook supporters are motivated in large part by a desire to protect identity, ideological and cultural considerations rather than economic ones. Therefore, the interpretation of Jobbik’s success as a mere political consequence of the economic crisis is a false simplification. The results also stress that Jobbik party should not be grouped together with other nationalist populist parties in Western Europe. While there are obvious similarities, the demographics, concerns and attitudes of Jobbik supporters — as well as the Hungarian context — differ in significant ways. The research was supported by Open Society Institute. The research paper was released at an event at the British Embassy in Budapest on 30th January 2012.

Main findings of the study

The primary data source used in the study was a survey of 2,263 Facebook fans of the Jobbik party that was conducted by Demos UK. These data were compared to the dataset of Facebook fans of populist parties and movements in 11 Western European countries and traditional representative survey data on Jobbik voters. Facebook was selected because it is the most widespread and popular social media website used by supporters of the Jobbik party. The Jobbik party has been particularly effective at mobilising young Hungarians, by using online communication and messages to amplify its message, recruit new members and organise. Indeed, the online social media following on Facebook of Jobbik is greater than its official membership list. As of January 30, 2012, the party’s official Facebook profile has almost 39 000 fans – while, according to statements of its leaders, the party has around 13 000 formal members. 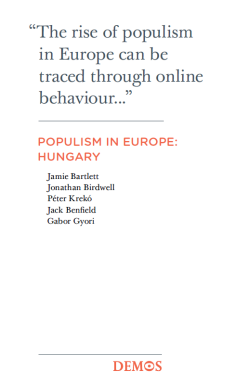