The Heinrich-Böll-Stiftung commissioned a study by Political Capital entitled “Focus on Hungary: Refugees, Asylum and Migration”. The authors of the study analyse the Orbán Government’s rhetoric and policy measures with regard to refugee, asylum and migration issues.

The so-called ‘refugee crisis’ poses major challenges to the EU and its citizens. It is clear that solutions based on solidarity and responsibility sharing must be developed and implemented on the EU level in order to face these challenges. At the same time it is important to analyse the responses by governments and state officials because they tell us a lot about the state of the EU.

The example of Hungary is extreme in many ways. We have not yet seen such a systemic, ideological, and programmatic attempt to close the EU’s external borders by building a fence in order to keep refugees out, to deny basic European values, including human rights, and to refuse to fulfil humanitarian obligations. On the other hand, Viktor Orbán’s approach and the Hungarian way of handling the ‘refugee crisis’ have unfortunately become a model in other EU Member States.

In view of these developments, the Heinrich-Böll-Stiftung commissioned a study by Political Capital in order to provide the reader with important background information, facts and data. The authors of the study analyse the Orbán Government’s rhetoric and policy measures with regard to refugee, asylum and migration issues. They describe the historical context, supply valuable data, and ask in what way the Government has influenced public discourse. The study shows how democratic opposition parties, the far-right, and civil society actors have responded to the Government’s anti-refugee policies. The authors also discuss the question how the crisis has affected regional cooperation. 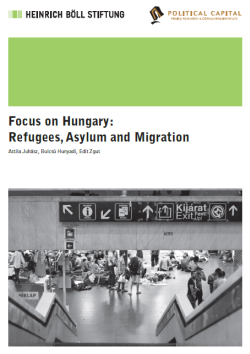